No red dye in these cupcakes! Beetroot Red Velvet Cupcakes with Whipped Chocolate Ganache are tender, moist and oh so chocolatey. Naturally beautiful! This recipe is vegan and easily gluten free. 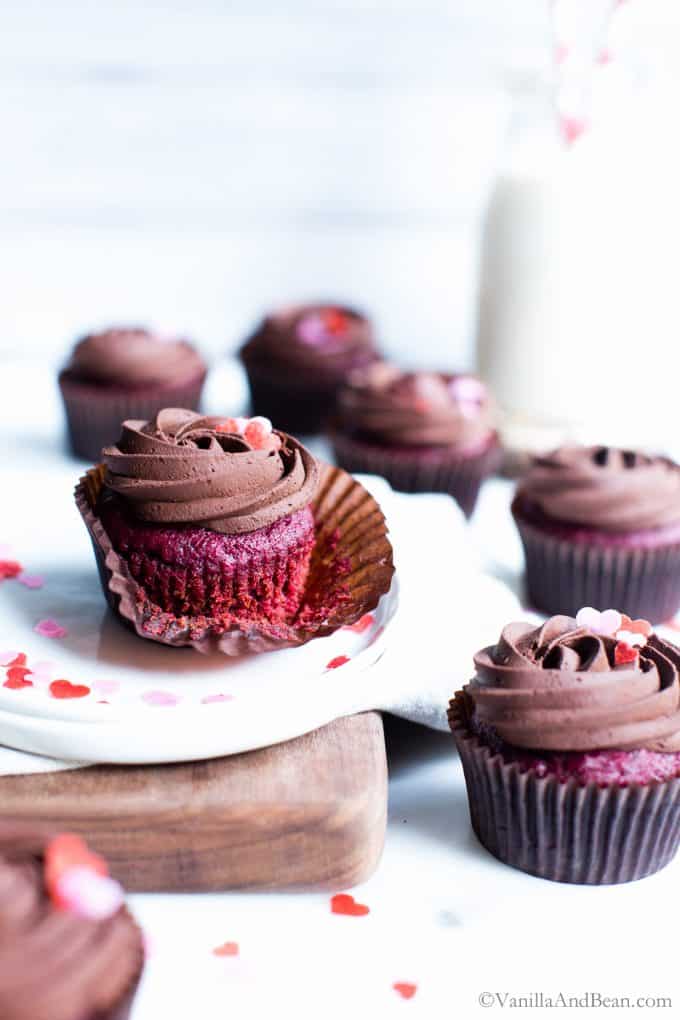 This recipe was updated with new notes, photos and a gluten free option 2/20.

Are you getting ready for Valentine’s day or not so much? I’m somewhat on the fence, depending on the year.

Things don’t usually work out how I have them worked up in my head anyway. Ya know? And I expect this. I’ve come to accept it and even laugh about it. I mean, I don’t want diamonds or roses.

Being whisked to an exotic local with a romantic picnic waiting, wine and really good food or a luxurious spa appointment? Now you’re talkin’! Or how about something simple, like homemade beet red velvet cake topped with a luxurious whipped ganache? Yes please!

And so, these beet red velvet cupcakes are part of the little things that make life sweet and special. They’re such a treat! 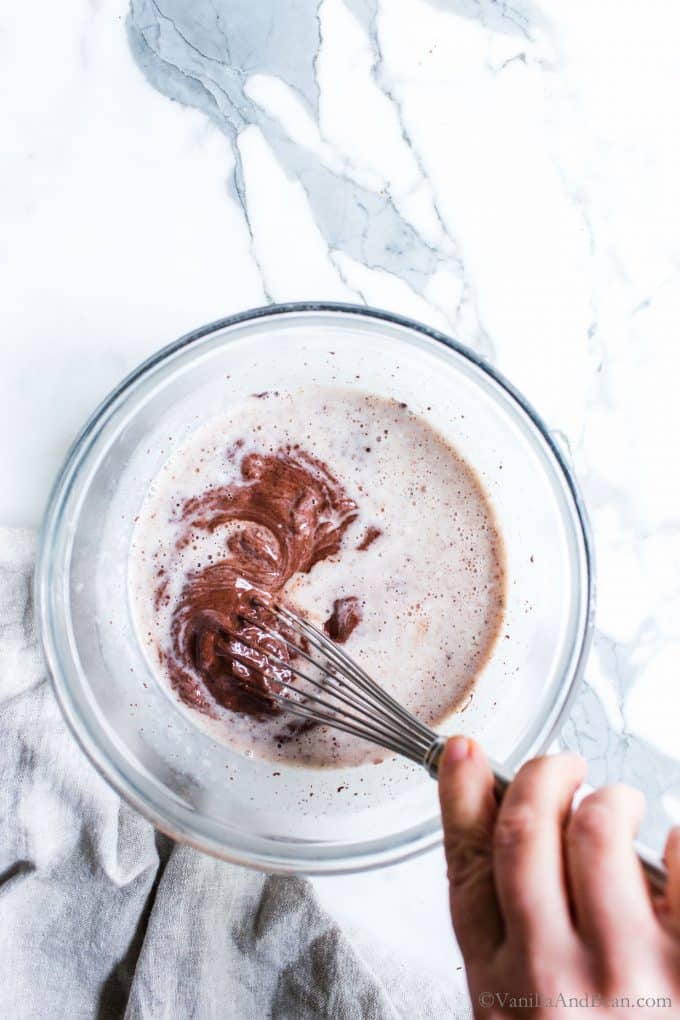 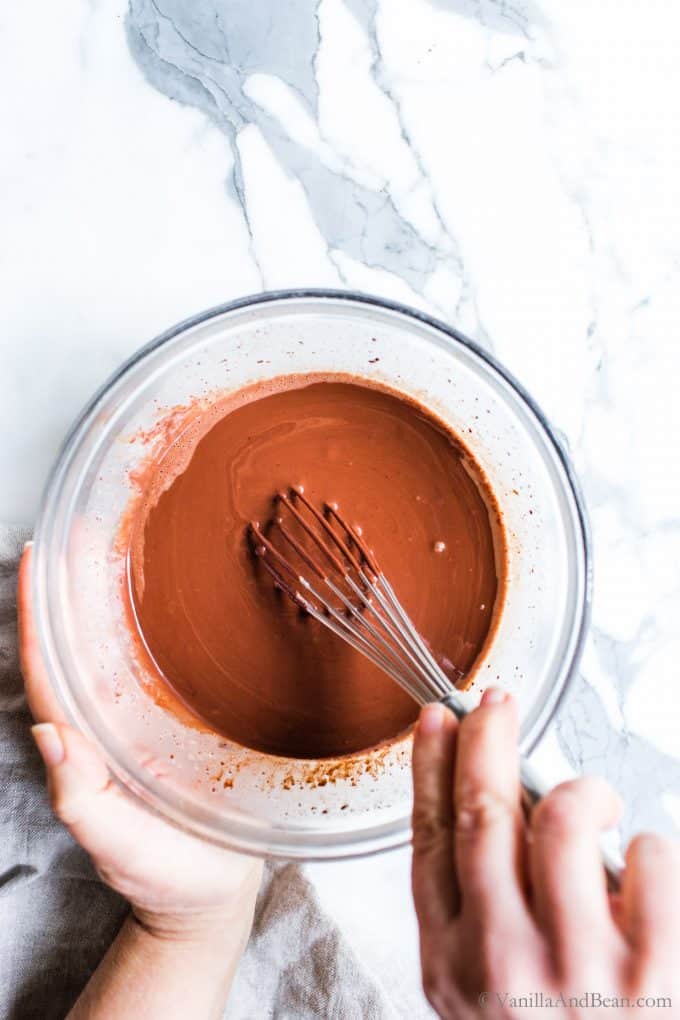 I like the idea of Valentine’s day and the idyllic romance surrounding it. Rob and I don’t celebrate it per se. After all, going out is usually a crowded mess because SOMEone forgot to make reservations (ahem) and even still if reservations are made, it’s a crowded mess.

We celebrate love in the little everyday things throughout the year. For Rob, it’s things like putting the toilet seat down, or moving his piles of stuff to a single pile of stuff. Yeah, the little things. 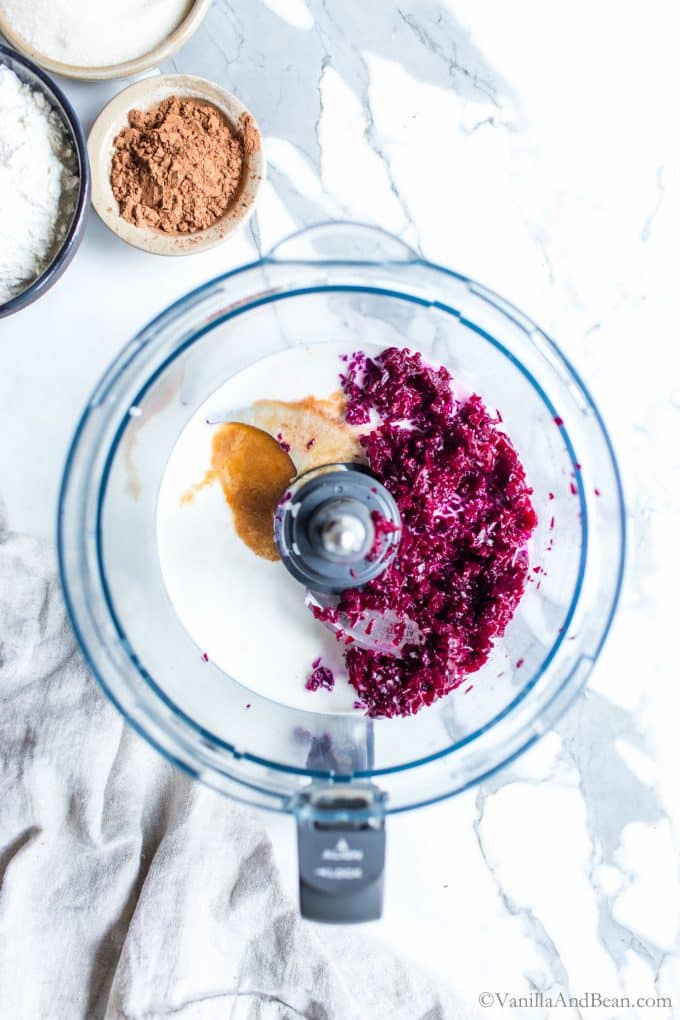 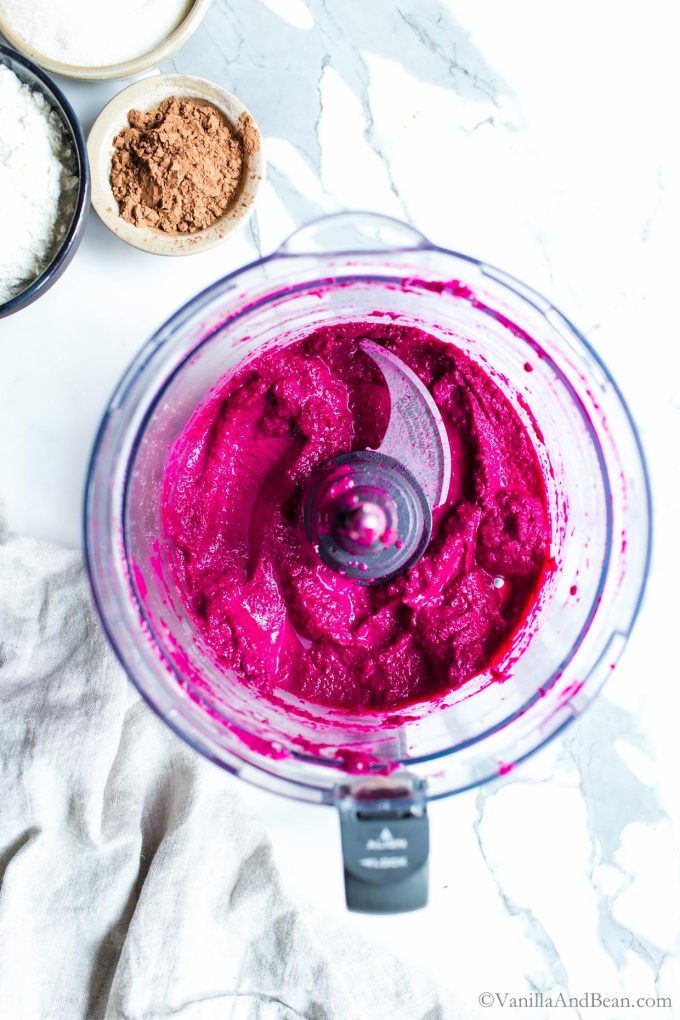 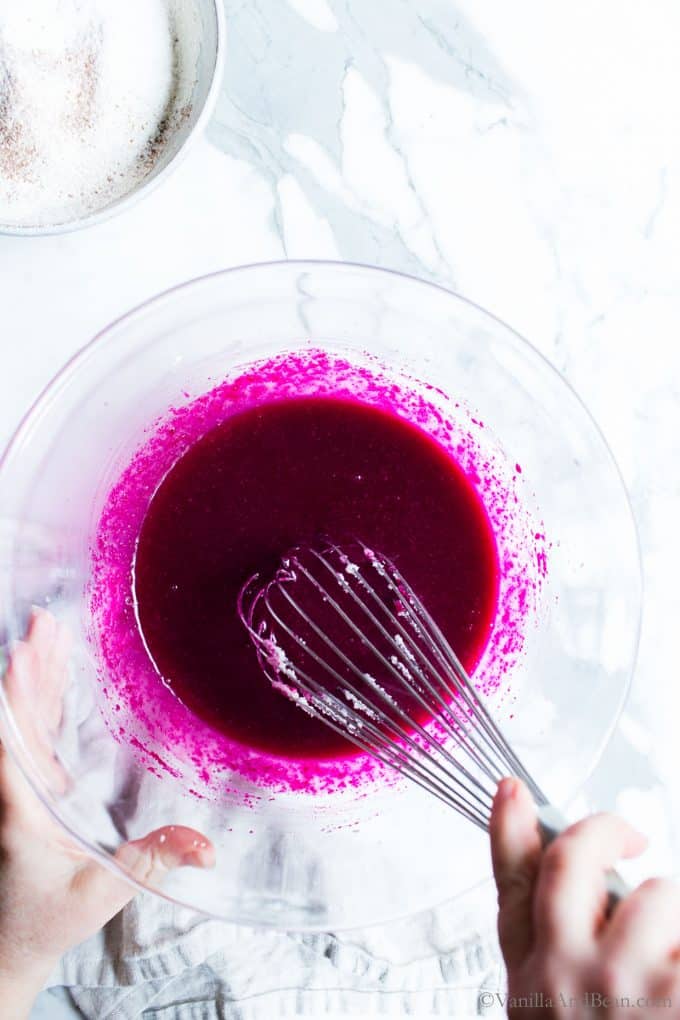 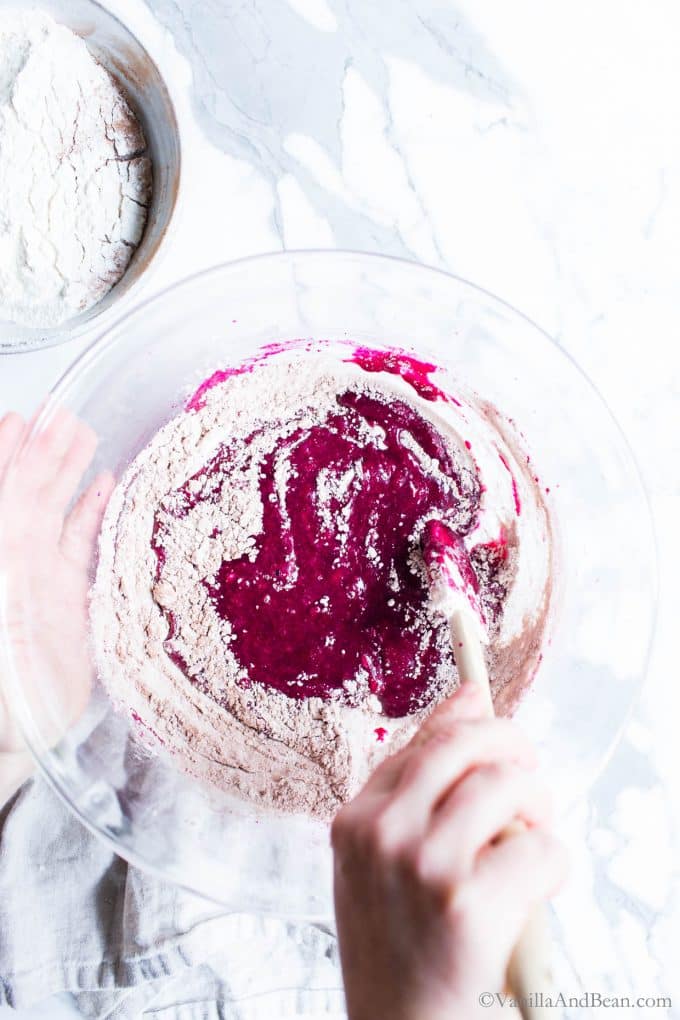 These aren’t the traditional Red Velvet cupcakes you’ll see on Martha Stewart or The Food Network, and they aren’t true red. But I like the fact, especially, that they’re made with whole ingredients, less sugar, and beets that I picked up from the farm not to far from home.

These beet red velvet cupcakes started as a basic egg, butter, flour, milk and beet cake. And they were really good after some tweaking. But then I wanted to try and make them vegan. I’ve been making vegan cupcakes for a while now, but never with beets. This changed a few things.

Typically, red velvet cupcakes have buttermilk or sour cream in them, and of course these are vegan, so no sour cream or buttermilk. Instead I opted for cashew milk and apple cider vinegar (ie vegan buttermilk), but then ended up omitting the vinegar later because…

The first and second time I attempted these, they were flat, heavy and too brownish post baking. Too brown to be called red velvet. I ended up omitting the vinegar, baking soda, banana (ie egg replacer), and increased the flour, baking powder and cocoa. I love the results!

Baking can be finicky, but so worth the journey! 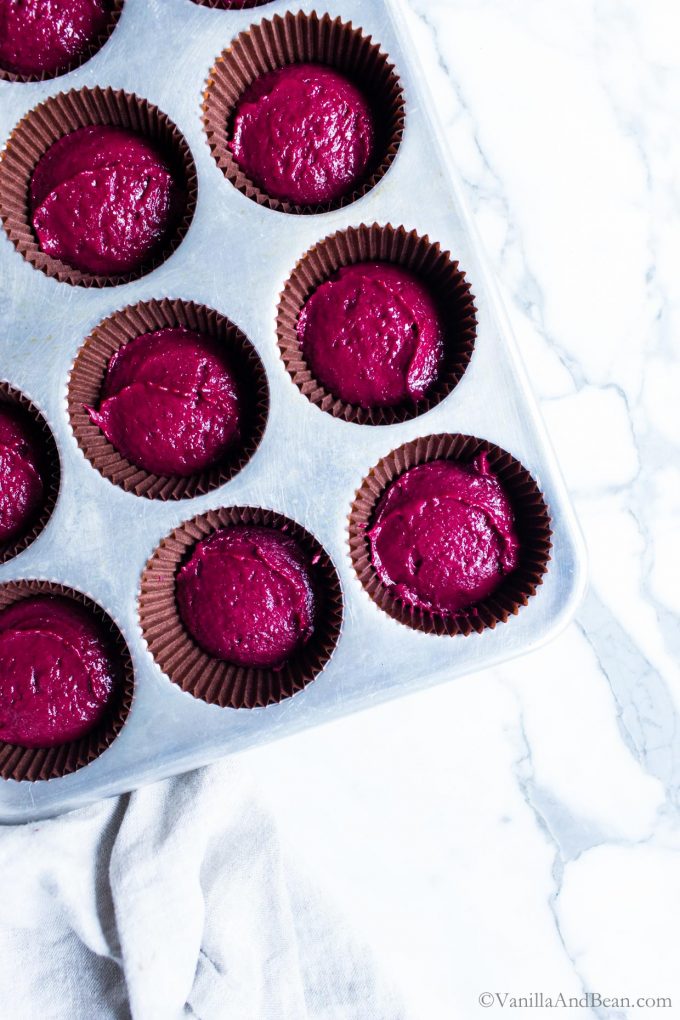 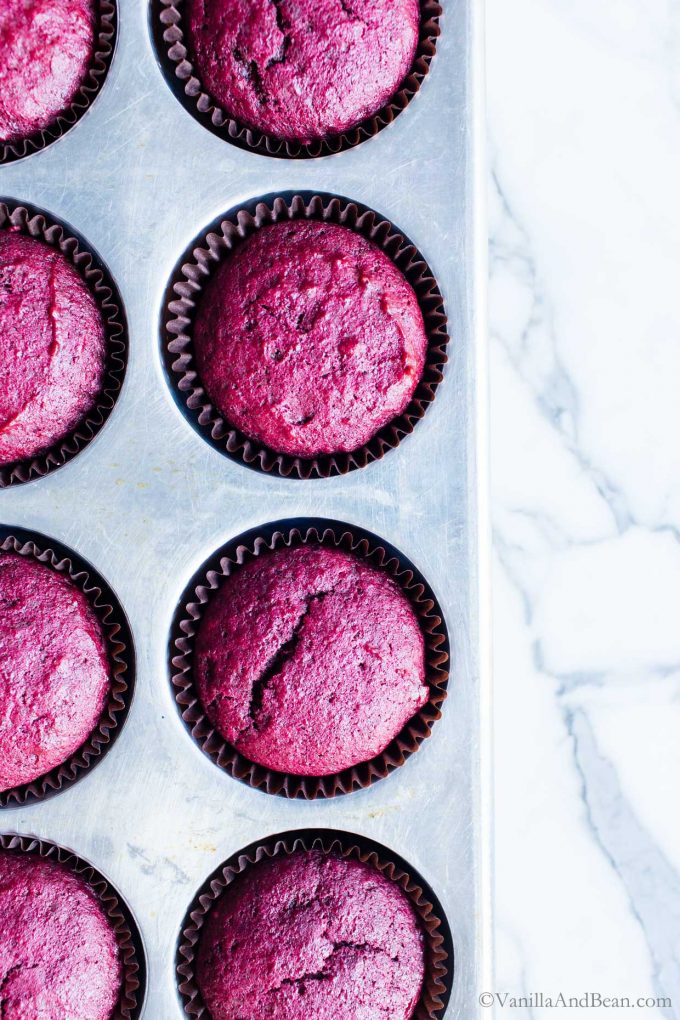 Whip the Ganache and Decorate 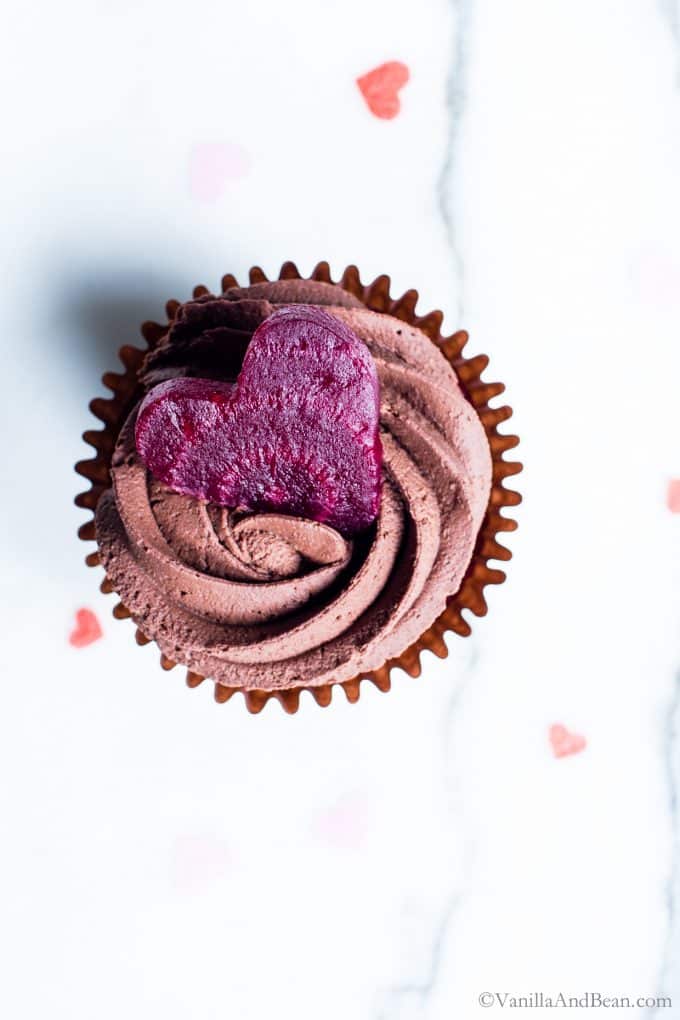 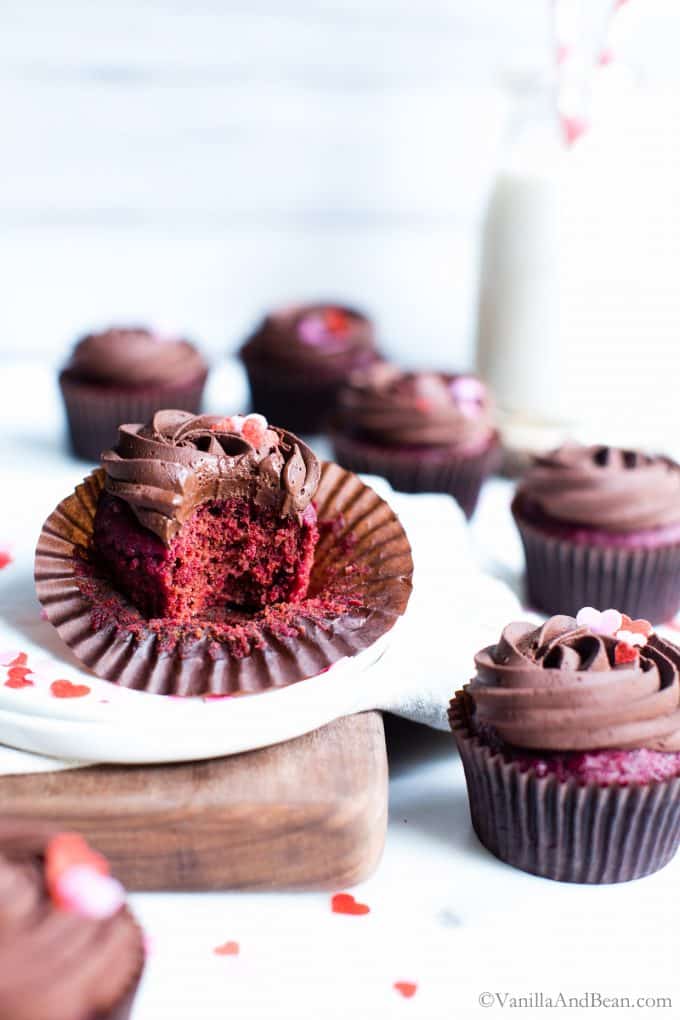 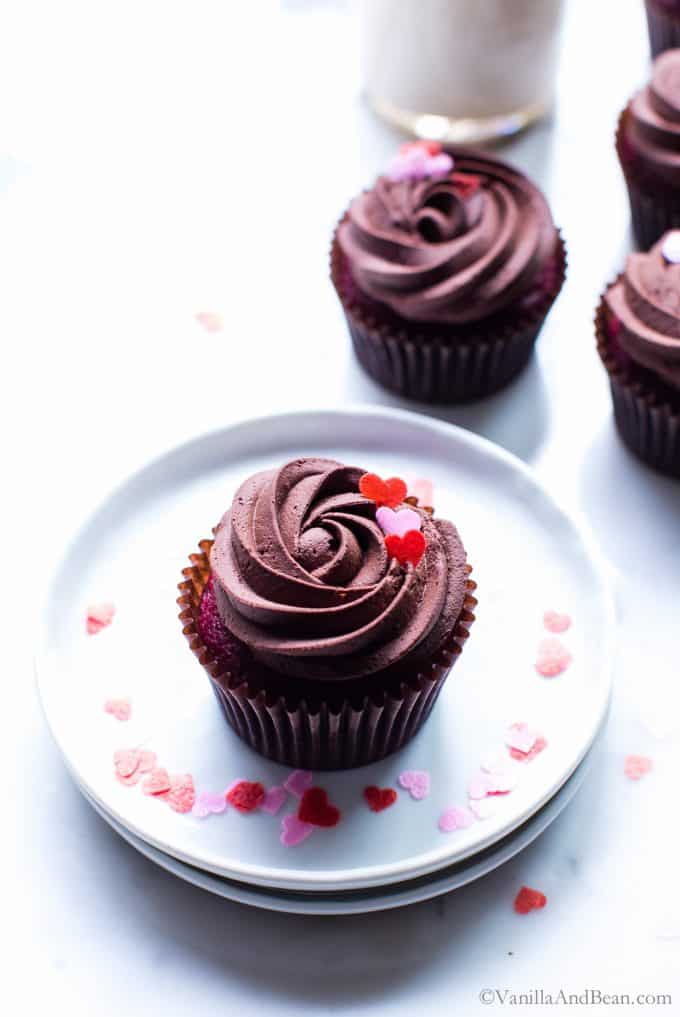 Tools I keep on hand for cupcake making and decorating (these are affiliate links): 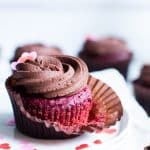 The star of these cupcakes are the beets that give it its color, although you'd never know they're in there. Slightly chocolatey, tender and rich, top with whipped chocolate ganache. To save time on these cupcakes, roast extra beets next time you're making them. Peel, process or grate the beets then pop in the freezer so they'll be on the ready when you are to make these cupcakes. NOTE: Total time below does not reflect time to roast the beets or fun with decorating. This recipe is vegan and easily gluten free (see recipe notes for gluten free directions). | Recipe can be made using a stand mixer or can be mixed by hand.
Prep Time45 mins
Cook Time30 mins
Total Time1 hr 15 mins
Course: Dessert
Cuisine: American, Vegan
Keyword: Beetroot Cupcakes, Vegan Beet Red Velvet Cupcakes
Servings: 12 Cupcakes
Calories: 325kcal
Author: Traci York | Vanilla And Bean

Finish the Ganache and Assemble:

To Store the Cupcakes:

MAKE IT GLUTEN FREE: Follow the recipe in full subbing these ingredients for the cake portion | Use 1 to 1 GF Baking Flour (1 1/4 C / 210g) (I like Bob's Red Mill) + 2 Tbs Tapioca Flour + 1 1/2 tsp Baking Powder. A note on COCONUT MILK: I use Organic Thai Kitchen brand coconut milk. Fat content varies from brand to brand.  UPDATE (2/20): Because I had a few makers share that they had difficulty getting the ganache to whip, I increased the chocolate (fat) in the recipe just a bit after retesting. I found the ganache was much easier to whip - and more consistent.  If you made this recipe before as previously written with 1 1/4 C chopped chocolate successfully - feel free to stick to this amount. I've made it both ways and found the increased chocolate more consistent at producing the best results.  *This resource lists so many excellent vegan chocolate brands. Find what's at your market and use it! I love Green & Black's, Theo, Endangered Species, just to name a few. **I have an easy tutorial on How to Roast Beats if needed. Chocolate Ganache adapted from my Chocolate Decadence recipe. Cupcake Recipe adapted from Vegan Cupcakes Take Over the World and inspired by NYT.