Whip this dairy free and vegan pie crust up in no time! The dough is super simple to work with and it’s make ahead ready! This crust is light, and flaky and perfect for all your pie crust needs! I realize there’s some uneasiness about making homemade pie pastry. I get it, I was there too. But once I started making my own, I never went back to store bought. I found the more I made it, the easier it became to handle and my favorite part, I could control the ingredients. Pie dough is freezer friendly, able to be made weeks ahead and frozen, then thawed in the fridge the night before you need it. It also holds well in the refrigerator for at least two days prior to use.

The type of pie pan you use can make a difference in your crust. I use stoneware and glass, both of which seem to bake more evenly than metal. With stoneware, with its slick surface, the dough tends to slide down, which makes it look like the pastry shrunk a bit. With glass, the edges tend to keep their shape better, and you can keep an eye on the bottom of your crust while baking; an advantage if you’re uneasy about pie-baking. Martha Stewart has a dish debate that may be helpful.

Below, I share my process, tips, and recipe for a vegan blind-baked single crust (pictured) and double crust dough. Use a blind-baked crust when the filling will take longer to bake than the crust. It also helps to prevent a soggy bottom. Who wants a soggy bottom anyway? And….

There’s a video below!!

I was skeptical, y’all, until a Vanilla And Bean reader asked me to create a Vegan Bourbon Pecan Pie. Then I got to work testing a vegan pie crust using coconut oil, preparing for the pecan pie.

It didn’t happen the first time or the second time. I tried using melted coconut oil and made a complete mess. Then I tried cutting solid coconut oil in just as I would for an All-Butter Buttermilk Pie Dough, hoping to make an extra flaky dough. What I got were melted pits of nothing in my crust. Determined to make a vegan pie crust, I got out the food processor and processed in solid coconut oil, until I got an extra mealy consistency. After baking this dough it came out the way I envisioned and exceeded my expectations. It’s easy to work with, the dough is silky, the baked crust is flaky and it tastes delicious.

Without extra folding or handling, I was quite impressed not only with the flavor but with the texture of the crust. And I could work the dough at room temperature without worrying about getting the dough too warm.  A win-win in my book! 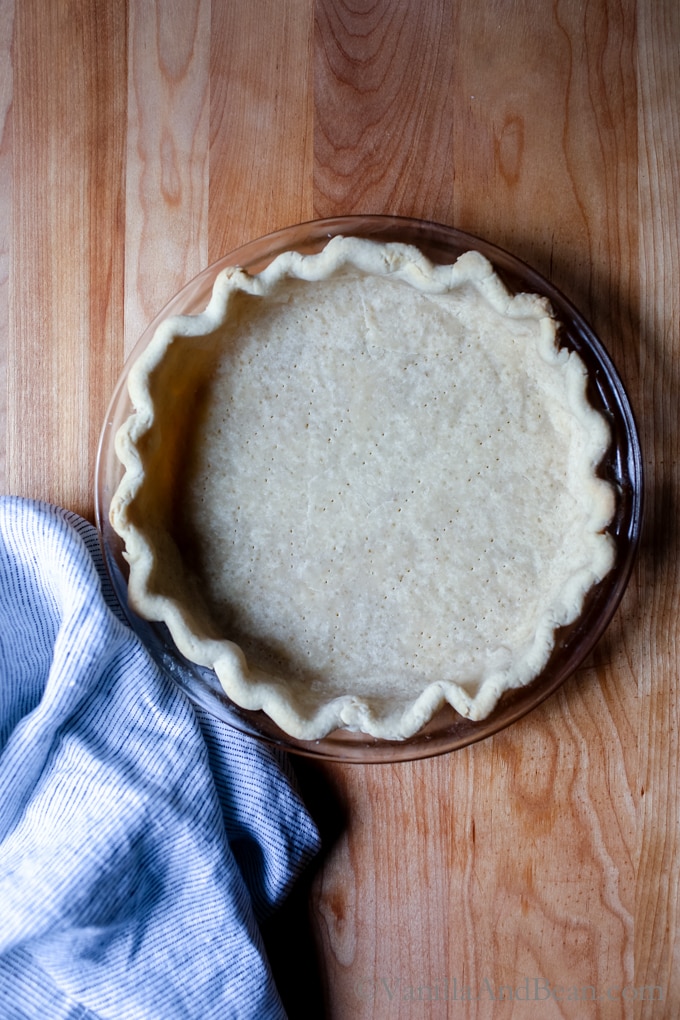 With regards to crimping and fluting, this is a skill that takes time to master. I’m still learning and am inconsistent in my work. Some days it looks good, others, not so much. When that’s the case, I cut out leaves or other shapes and and decorate over the crust edge. I just keep practicing!

Rob said this crust was a “buttery crust” (!!). Y’all, he detects any and everything that’s not regular (his words), so for him to say this crust tastes buttery without knowing it’s coconut oil kinda knocked my socks off. Me? I don’t think it tastes buttery, but it certainly gives butter a run for it’s money!

This vegan pie crust is quick, easy, flaky, and tastes light, and crunchy.

Watch A Video To See How to Make It!

RELATED: Whip up this Vegan Bourbon Pecan Pie once you’ve made this coconut oil pastry! 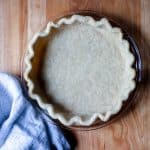 How to Make a Coconut Oil Pie Crust

Easy as pie! This vegan Coconut Oil Pie Crust is easy to make, flaky and tastes amazing! Make 2-3 days in advance and store in the refrigerator or up to a month in the freezer. It can be stored in a ball or already rolled out. When you're ready bake the dough, thaw it in the refrigerator and use as needed. I've included directions on how to blind bake the crust too. Recipe Yields Enough Pastry to Make 2, 9 1/2" (24 cm) Pie Crusts.
Prep Time20 mins
Cook Time25 mins
Total Time45 mins
Course: Component
Cuisine: American
Keyword: Coconut Oil Pie Crust, Coconut Oil Pie Dough, Dairy Free Pie Crust, Vegan Pie Crust
Servings: 8 Servings
Calories: 391kcal
Author: Traci York | Vanilla And Bean

Adapted from my All Butter Buttermilk Pie Crust recipe.