Make ahead apple sangria ready for your Autumn gatherings. Refreshing, festive and easy: Sparkling Apple Bourbon Sangria with a hint of ginger and cinnamon. 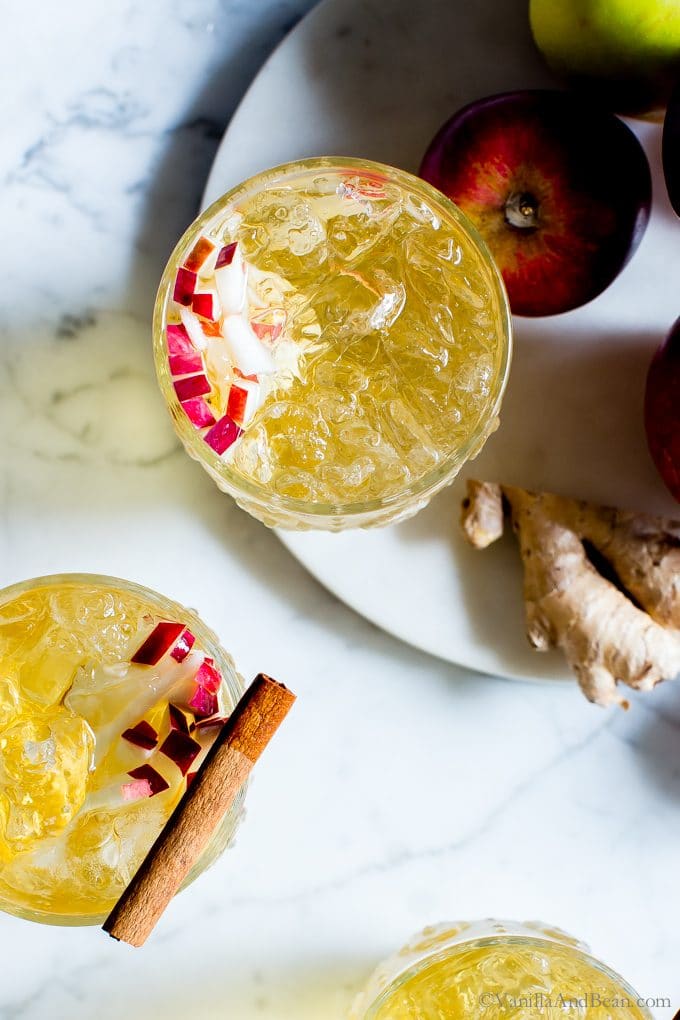 New to bourbon sangria? It’s easy peasy to pull together and tastes better with a little time to mingle in the fridge. Sangria’s not just for summer. It offers ready made cocktails that’ll help free your hands for other tasks like greeting guests, finishing up the Apple Dumplings, or for lazin’ on the couch enjoying appetizers. I’m partial to the latter, ahem.

Sangria is a catch-all term for wine based, fruit filled pitcher cocktails that improve with time while hanging out in the fridge. Sangria is served over ice, for a most refreshing experience.

For this apple bourbon sangria, I’ve included white wine, a glug bourbon (okay, more than a glug), a bit of maple syrup, ginger and cinnamon sticks. Top it off with sparkling apple juice for some festive bubbles. 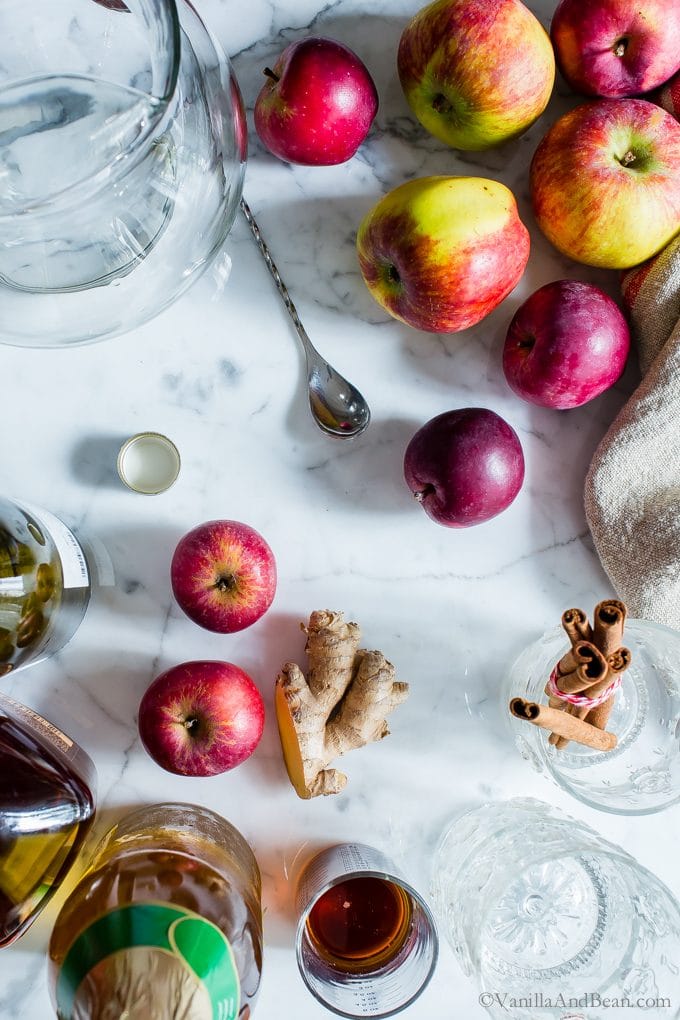 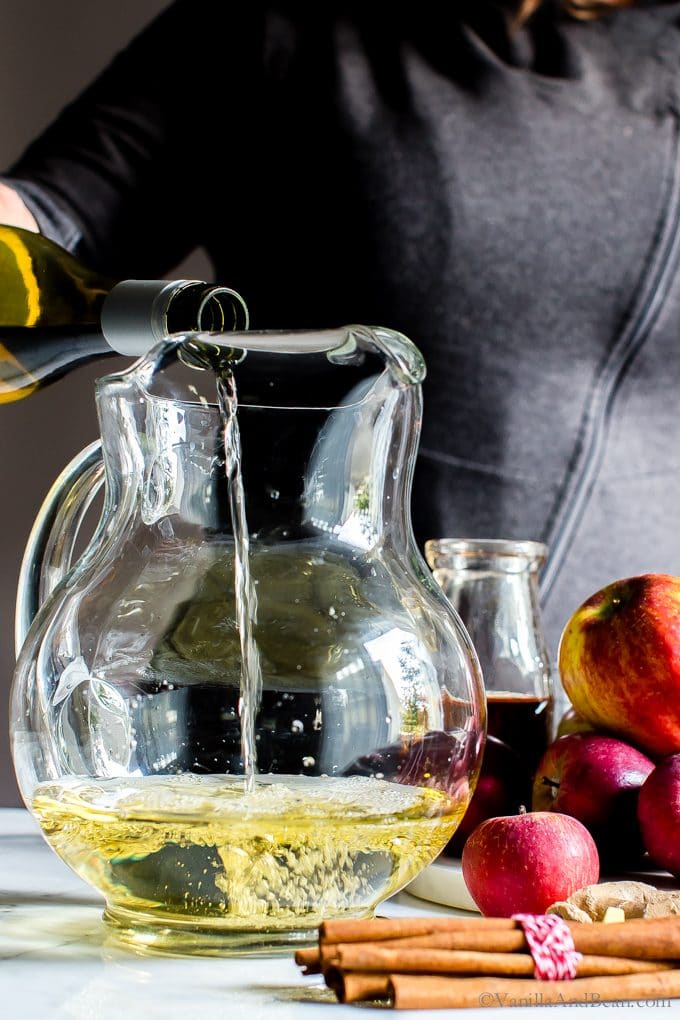 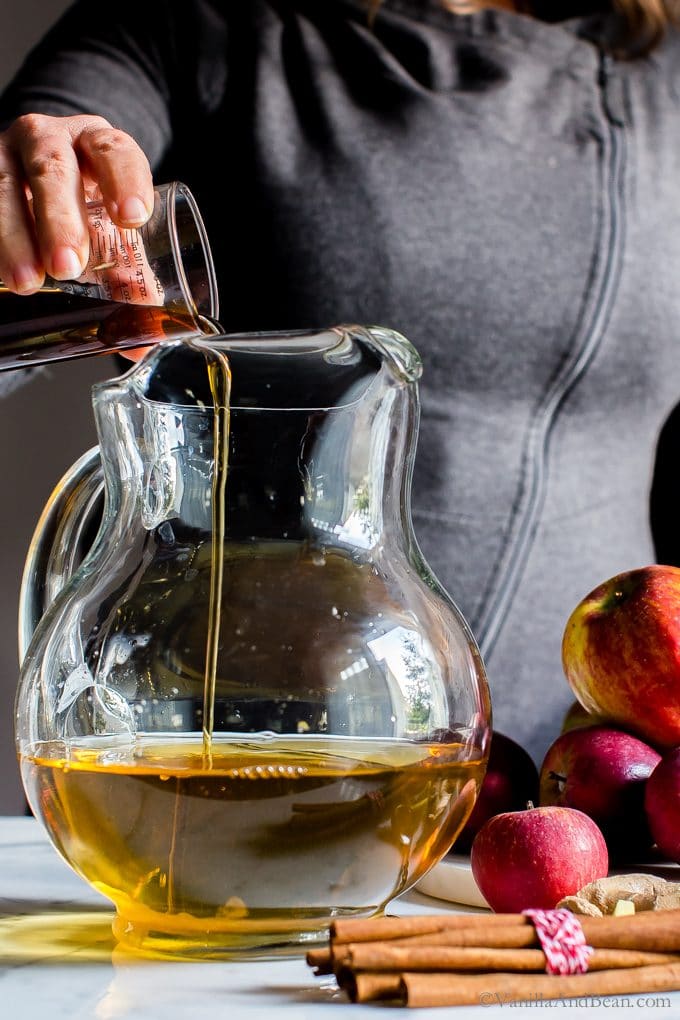 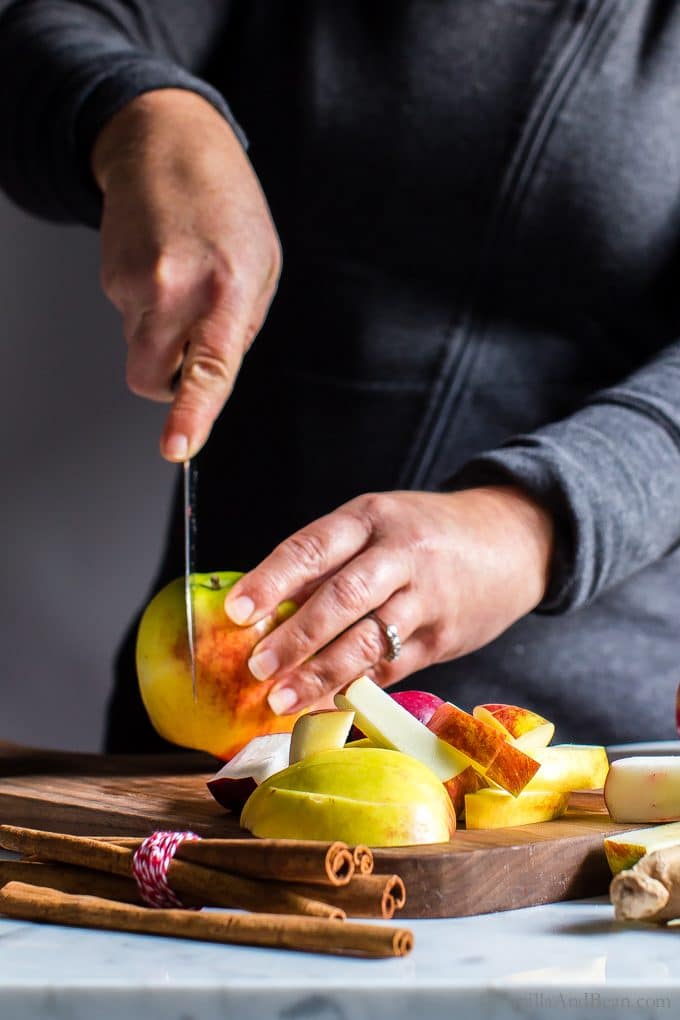 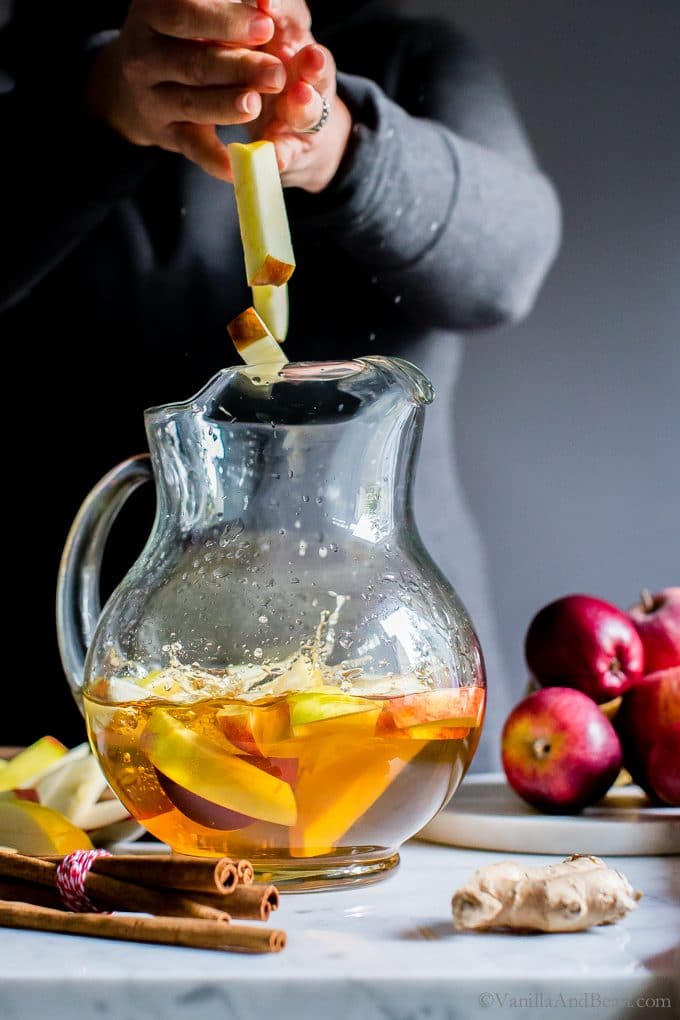 Bourbon’s caramel and vanilla notes completely win me over and they shine when paired with apples. Like peas and carrots, perfect partners in every way whether together in a cocktail, pie or cobbler. The combination just works.

These holiday bourbon cocktails are subtly sweet with a hint of cinnamon and ginger. When I taste this apple sangria cocktail, it reminds me of apple pie.

When it comes to holiday cocktails, I’m particularly fond of refreshing cocktails, preferring icy and bubbly over the stronger, straight varieties. Never-mind the cold, windy, driving rain outside. Stress and being with those we love often need a counter balance. It’s hot in the kitchen anyway (or maybe on the couch too), so why not have a little sipper on the side. The adults in my life appreciate this nevertheless. It helps us all get along perhaps a little better during the holidays. 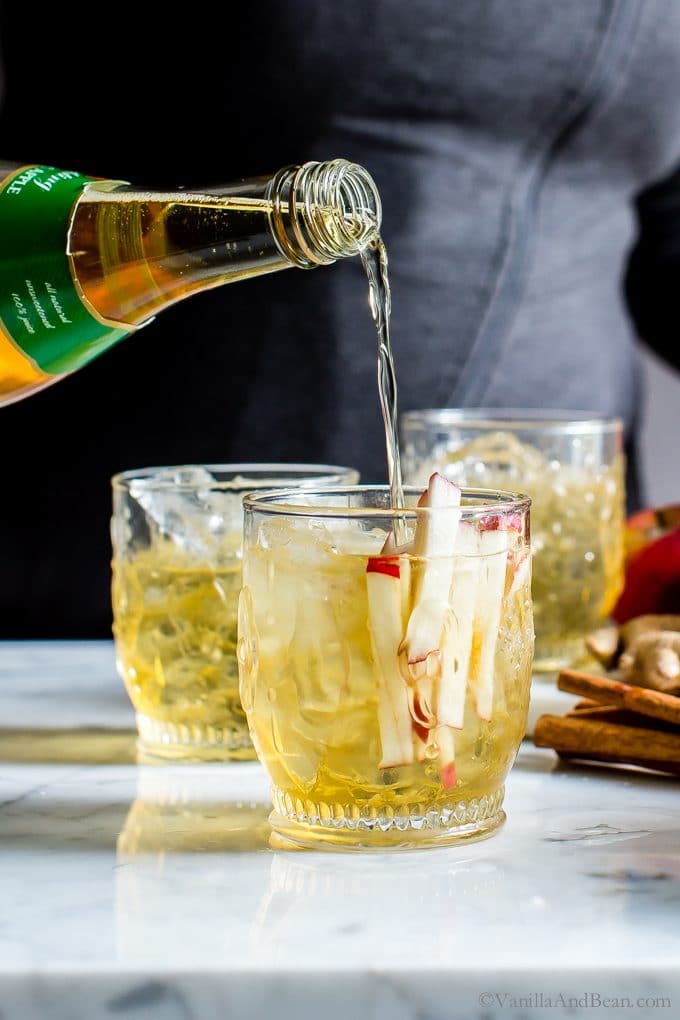 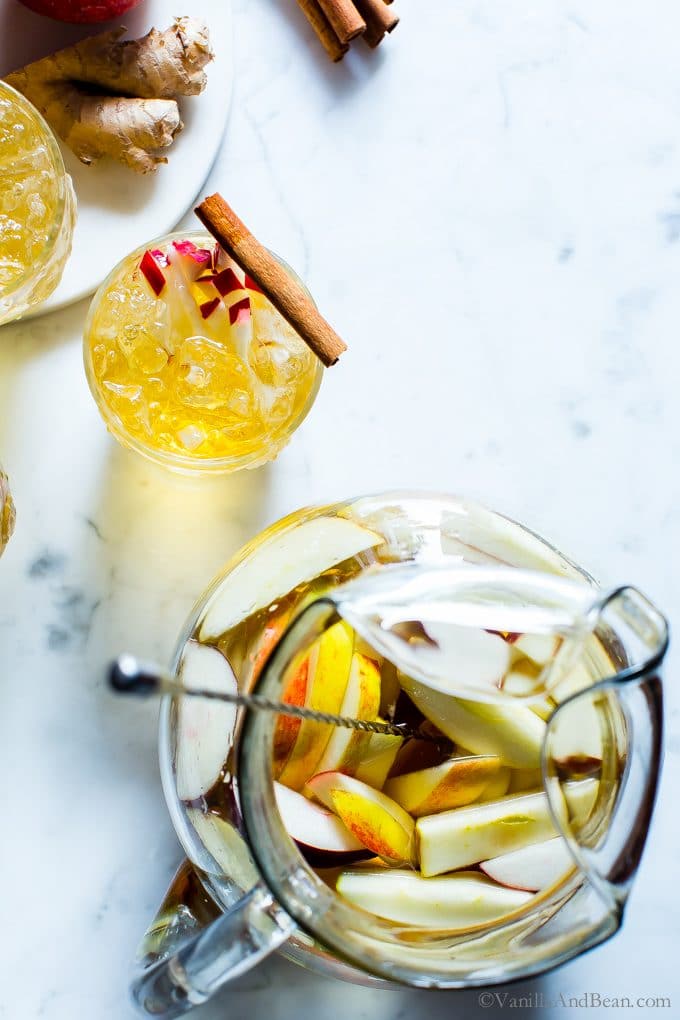 Sangria always has a wine component. For this white sangria, I like chardonnay. Here’s what you’ll need:

How to Make Apple Bourbon Sangria

Whip these holiday bourbon cocktails up at least eight hours in advance for best flavor. Here’s how to make apple sangria:

Just before serving, pour the sparkling apple juice in the pitcher or individually to top off low ball, ice filled glasses. 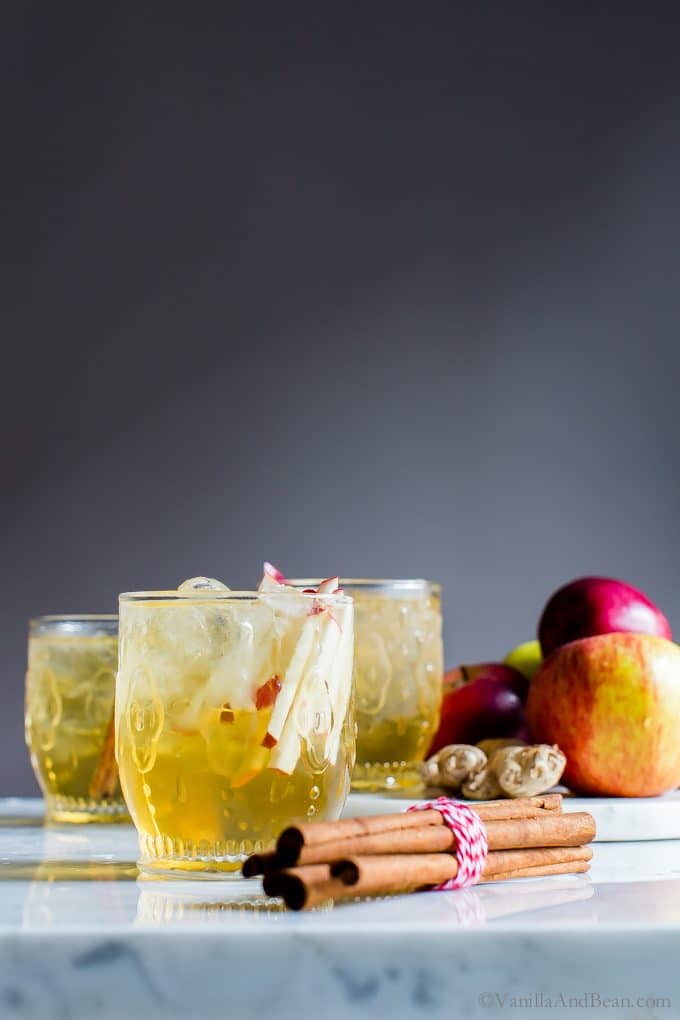 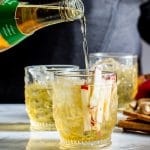 Make ahead ready for your holiday gatherings. Refreshing, festive and easy: Sparkling Apple Bourbon Sangria with a hint of ginger and cinnamon. *Servings are for low ball glasses. This recipe doubles with ease! *Time below does not include time for resting the sangria.
Total Time10 mins
Servings: 8
Calories: 184kcal
Author: Traci York | Vanilla And Bean