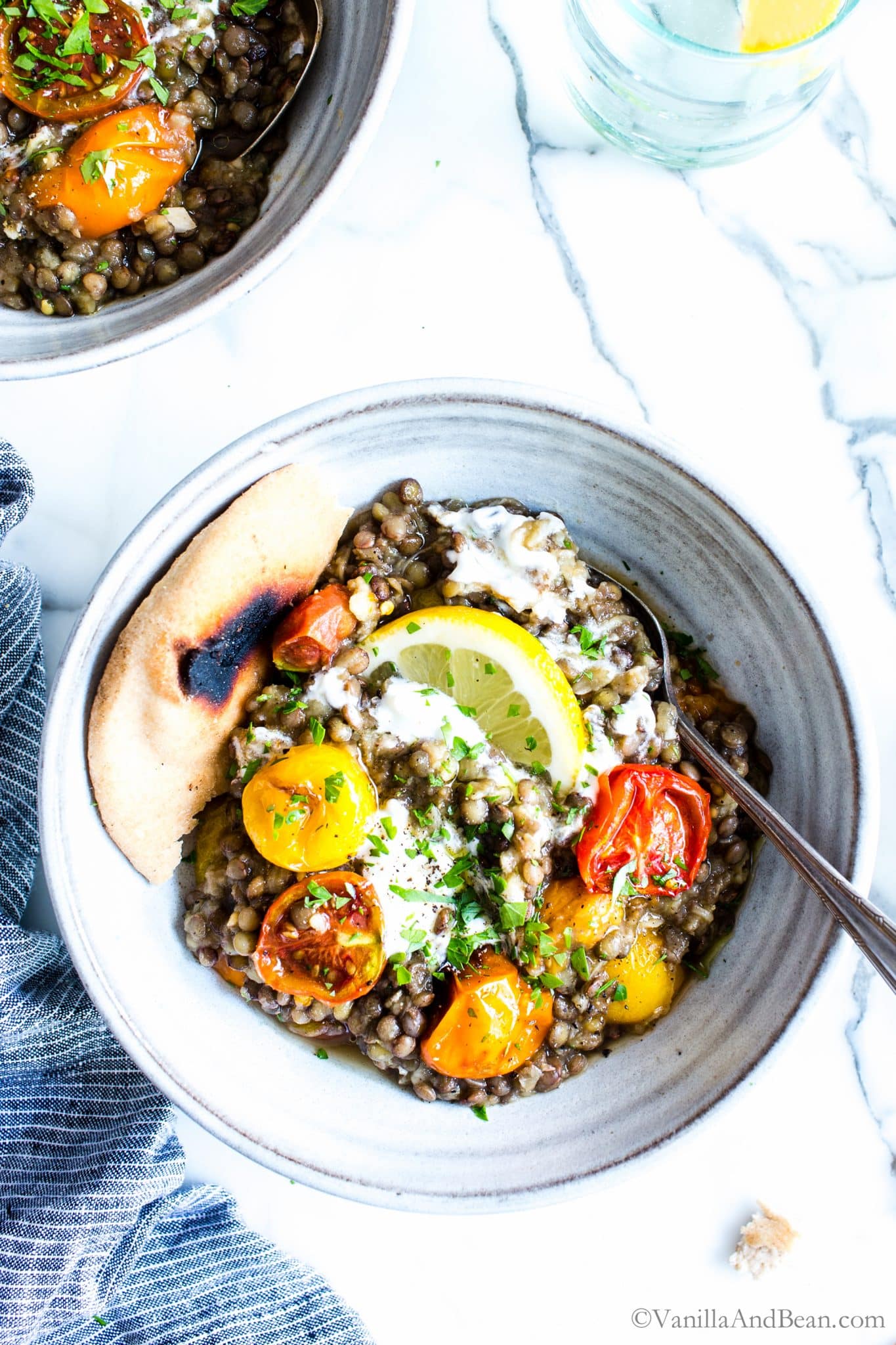 Hearty lemon-garlic Lentils with Roasted Eggplant and Tomatoes is nourishing and so simple to make.  Share this Mediterranean eggplant recipe with naan or a slab of crusty sourdough, and a dollop of Greek yogurt or coconut cream! This recipe is vegetarian, easily vegan and gluten free. 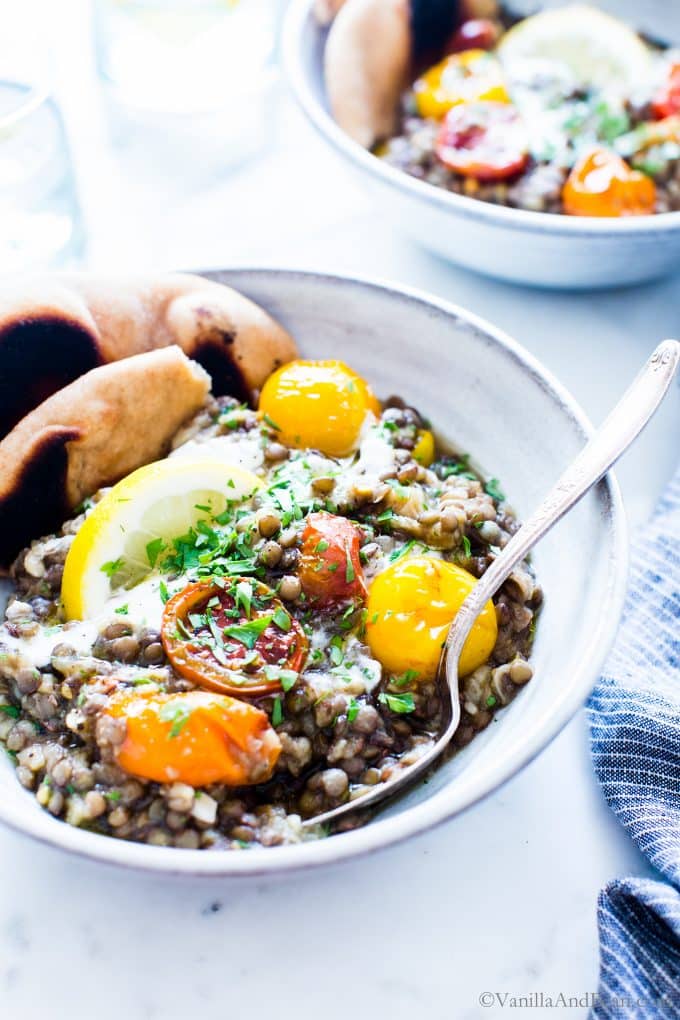 My kitchen journey is forever inspired by those that have gone before me, chefs, bloggers and of course from friends and family. This Mediterranean lentils recipe is inspired from Ottolenghi Simple but the recipe itself torn from the pages of my husband’s much loved weekly magazine, The Week, where it’s reprinted.

Rob recently discovered eggplant and was quite ardent that I give this Mediterranean eggplant recipe a go. He, who rarely gets excited about food. I was thrilled. I’m a fan of Ottolenghi and cook from his book Plenty, but I was unaware of another I’d need to add to my cookbook collection. 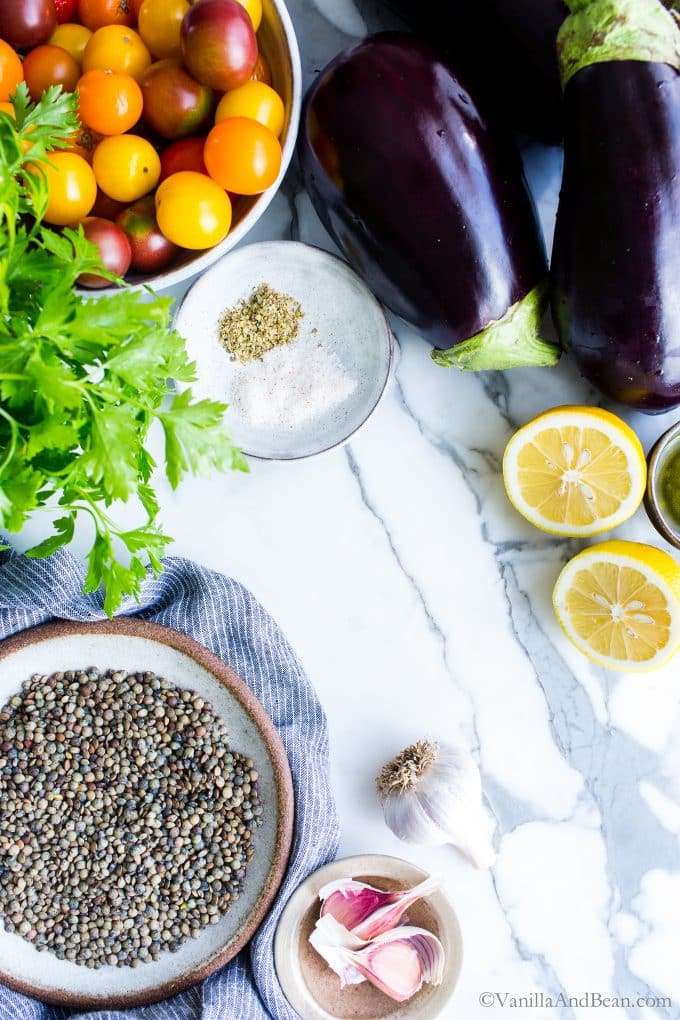 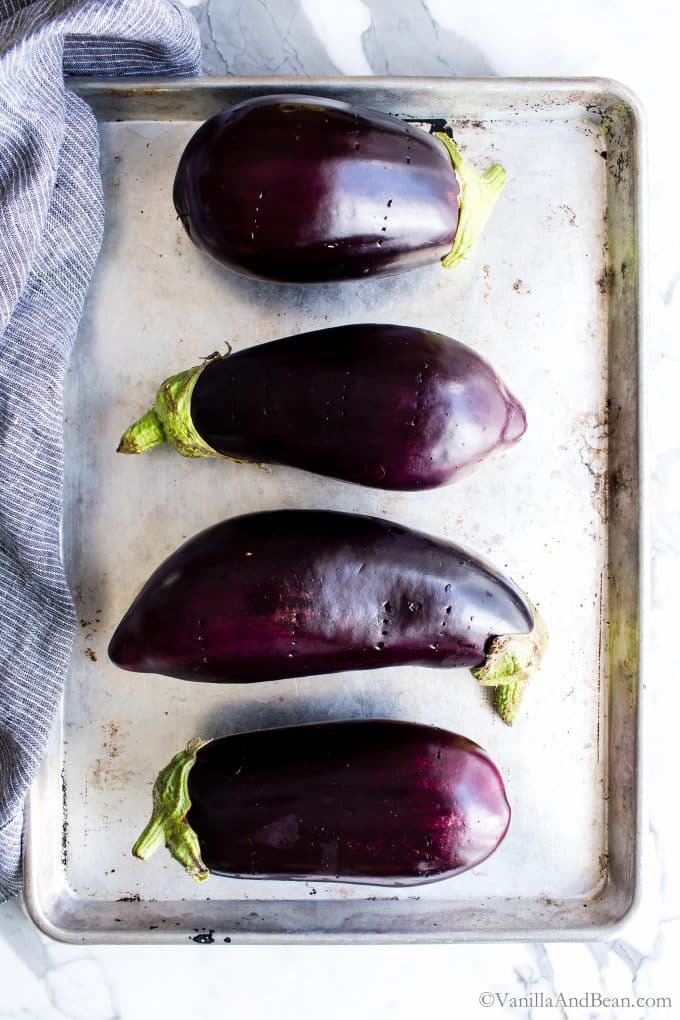 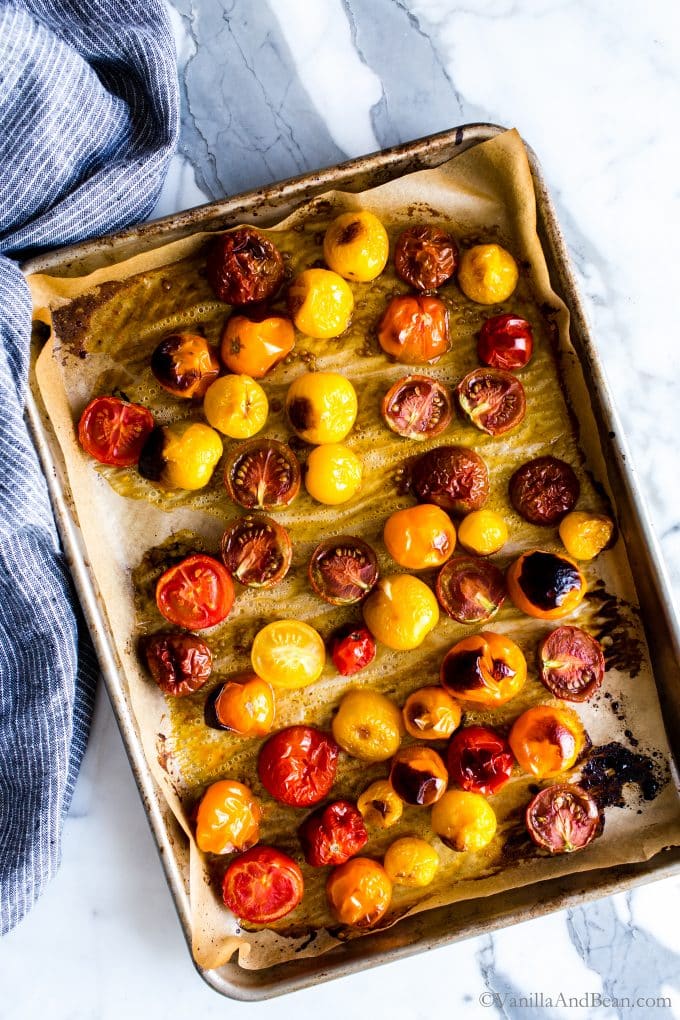 Mediterranean Lentils As a Main

While I followed the original recipe as a guide, I tweaked the lentil cooking method, added a few flavor builders, increasing the garlic and lemon of course, and scaled the recipe so that it’s a main for four rather than a side.

Lentils are filling enough, but with the abundace of eggplant and tomatoes in this Mediterranean eggplant recipe, it easily becomes a hearty main. Especially when shared with yogurt or coconut cream and crusty sourdough or a round of naan or pita.

Ingredients for Mediterranean Lentils with Roasted Eggplant and Tomatoes

Simple ingredients produce the most delicious flavors when paired with roasted veggies. Here’s what you’ll need for this Mediterranean eggplant recipe (see recipe card below for details): 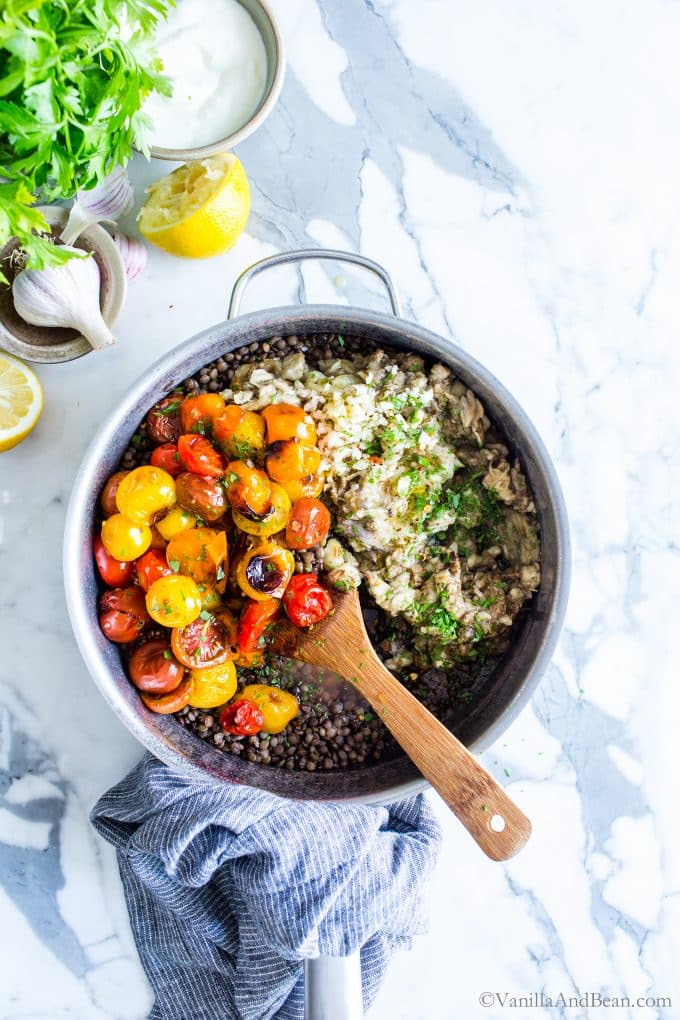 Quick Guide: How to Make this Mediterranean Eggplant Recipe

While it does take just over an hour to pull this recipe together, most of the time to prepare it is hands off. In summary, here’s how to make it (see recipe card below for details):

Share with another squeeze of lemon, parsley, yogurt or coconut cream and naan or sourdough. 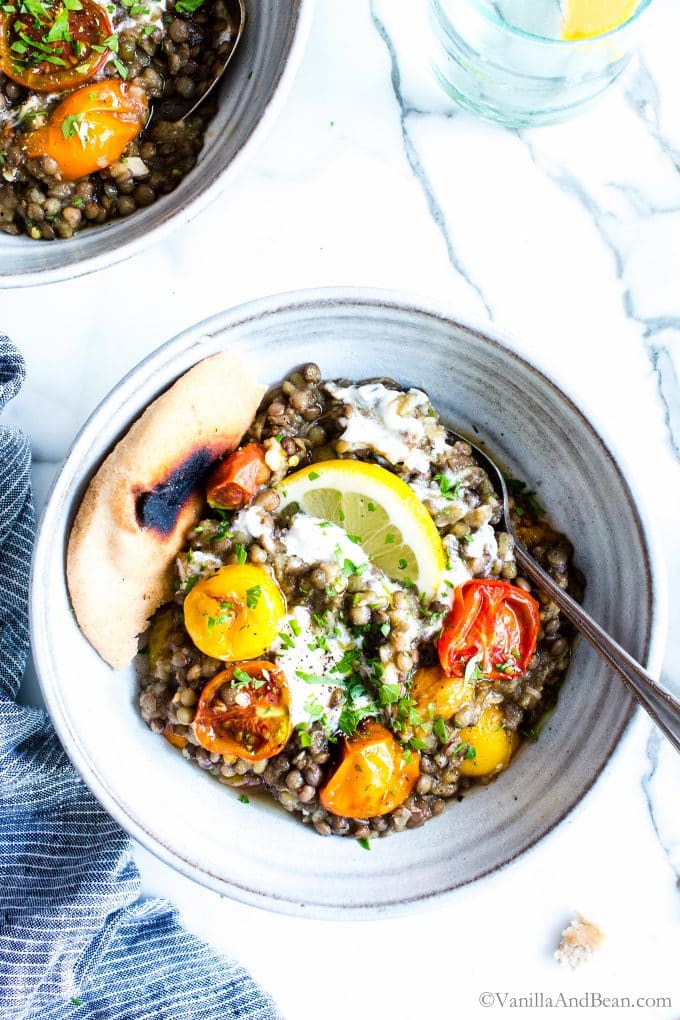 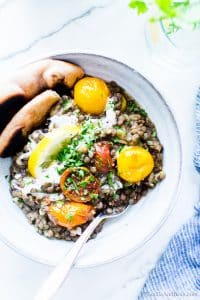 This recipe is adapted from Ottolenghi's Simple via The Week magazine. 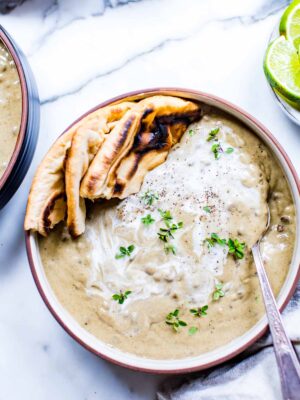 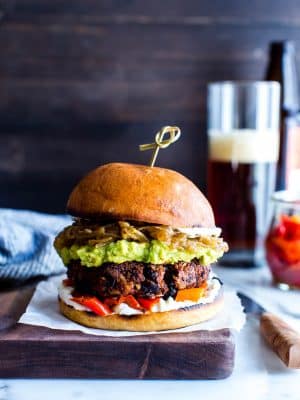 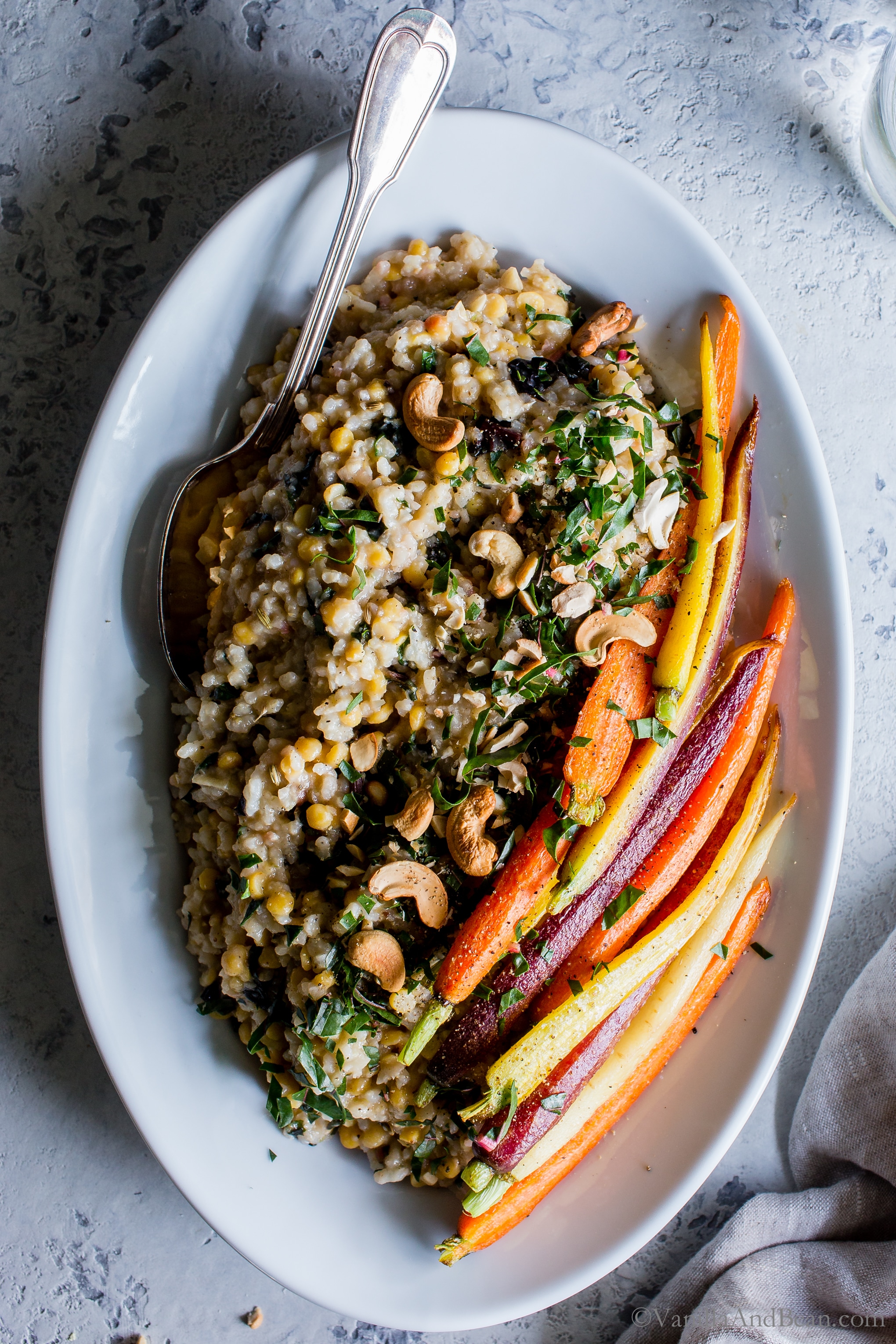 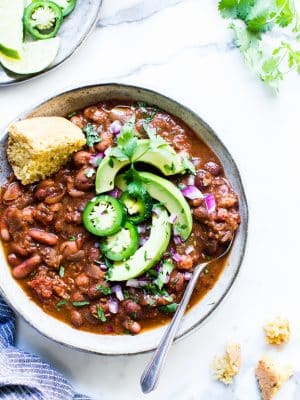 Join the Vanilla And Bean community to receive free sweet and savory vegetarian recipes, as well as my Five Secrets to Vegetarian Cooking email series delivered to your inbox! 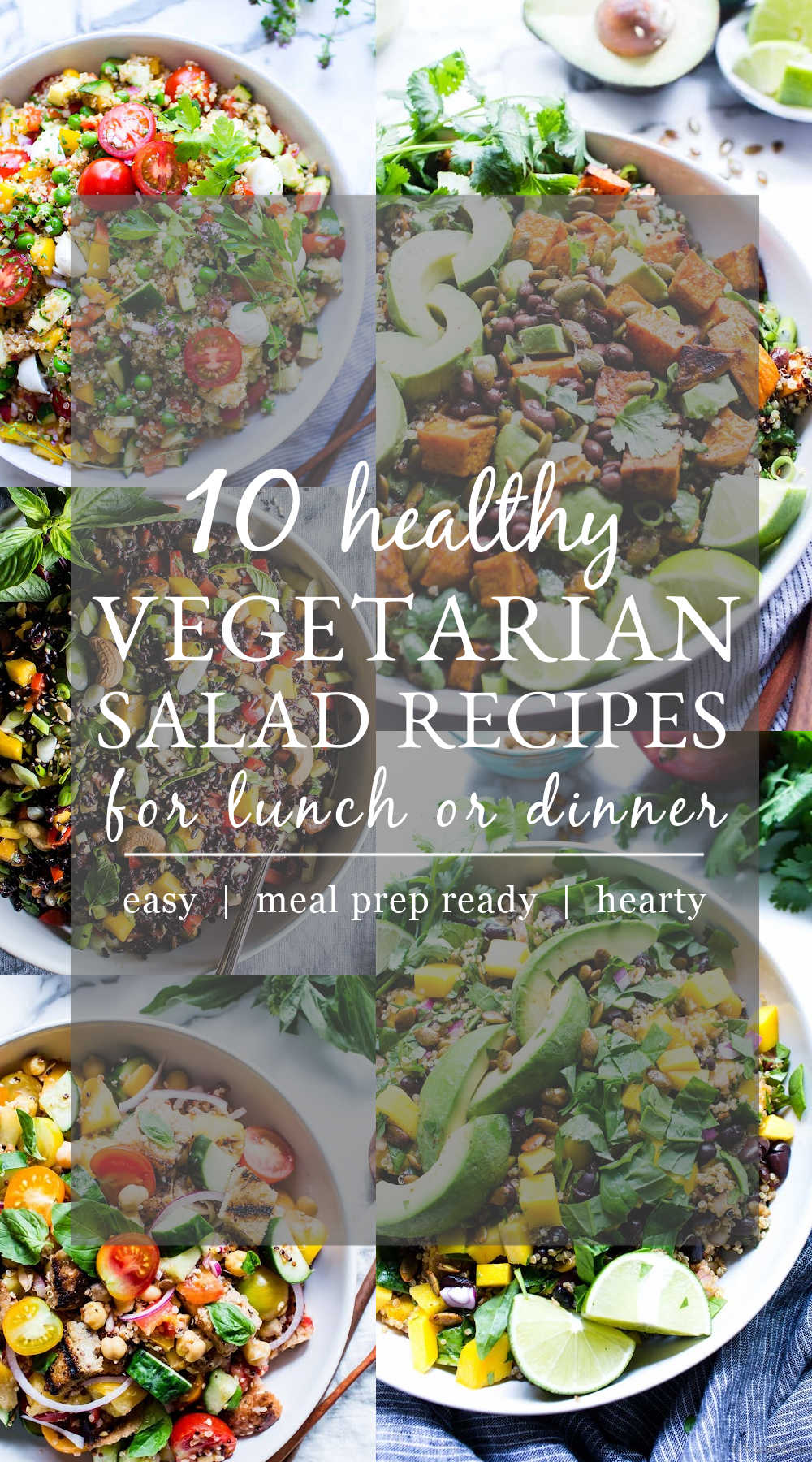 © Vanilla And Bean, LLC  – 2021. Unauthorized use and/or duplication of any content or images without express and written permission from this blog’s owner is prohibited. Licensing inquiries for publication, general distribution, and/or commercial use, please contact me on my contact page.