As a long-time admirer of artichokes, I was slow to learn how to cook fresh artichokes. I thought they were too much trouble, not worth the effort. I mean, why deal with them if I can go to the store and get a can, a jar or a frozen bag of hearts. Although they have their advantages, have you seen the ingredients in the jarred, preserved variety?

I no longer buy them.

And after seeing the conventional monoculture artichoke crops in California on our trip last Fall, I knew I had to do a better job of supporting organic artichoke agriculture. California artichoke peak season is from March – May with a smaller crop producing in October. Our local artichokes make a nice showing at the farmers market in the Fall, but I could hardly contain myself when I saw these organic beauties the grocery store.

A few years ago, I tried my first Roasted Artichoke with Curried Aioli at a favorite farm-to-table restaurant, Adrift, in Anacortes. I’ve written before about this inspired restaurant and their Caesar salad here. The bar faces the kitchen, our most favorite place to sit, where chefs work their magic.

They prepare their fresh artichokes on a griddle, cut in half, cut side up, then flipped, cut side down, with a bit of water added and lidded for a steaming effect. Served with curried aioli, it’s sublime.

They don’t trim the prickly leaves either. One less thing. From the moment I was able to find organic fresh artichokes, I got to work learning how to cook them. I left the prickly tips on and found trimming and slicing the end of the artichoke off was a step I could skip too because the leaves soften during the cooking process.

Just be careful when preparing them for the oven and don’t prick yourself.

I tried several ways to prepare artichokes, as there’re many. First I tried stovetop: roasting in a skillet and steaming. Then I tried oven-roasting: on a sheet-pan, then a skillet. I found skillet-roasting in the oven to be my favorite method. The skillet yields a bit of a smoky flavor and a nice char to the edges of the leaves.

I also found the choke, the center purply-prickly-hairy part, is much easier to remove after the artichoke is cooked. With a bit of nudging, it slips right out, as opposed to trying to remove it before roasting. I’ve tried it and it’s a pain. I often cut way more than needed, wasting too much of the good stuff.

Once the choke is removed, the artichoke is ready to serve with a squeeze of lemon and a quick aioli for dipping.

Roasted Artichokes with Curried Aioli is slow food at its finest. Each leaf is picked, lightly dipped, then eaten by scraping the fleshy goodness off the bottom end of the leaf with your teeth. Once all the leaves have been picked over, the heart is ready to be enjoyed. It’s at the base of the artichoke. The journey getting there, to that tender heart, pays off.

A leisurely glass of wine and in good company makes the experience even better. How to Roast Artichokes:

Now the artichoke is ready to enjoy! There’s a debate regarding cooking acidic foods in a cast iron pan out of concern for the pan imparting a metallic flavor to the food and/or damaging the finish. I’ve not experienced either. But if you’re concerned, an enameled skillet or dutch oven would work here as well.

Oh, be sure to discard the leaves in the compost or trash. The disposal won’t work – I’ve been down that road and it wasn’t pretty. Guys, Earth Day is April 22. Follow along with #EarthMonth for tips and inspiration about how we can be better stewards of our planet. Every little bit matters. This short, four-minute video is one example why. 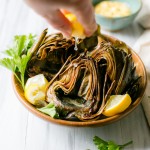 A simple way to prepare fresh artichokes. Roasted Artichokes with Curried Aioli is slow food at its finest. Enjoy one leaf at a time dipped in a sublime aioli. Work your way to the heart for the triumphant ending to this fabulous vegetable. Look for artichokes with unopened leaves and gives a slight squeak when squeezed. vegan + gluten free
Prep Time10 mins
Cook Time55 mins
Total Time1 hr 5 mins
Servings: 3 -4 Servings
Calories: 196kcal
Author: Traci York | Vanilla And Bean

For the Quick Aioli:

For the Quick Aioli:

1. There are conflicting reports on whether to use cast iron for cooking when acidic ingredients are involved (citrus, tomatoes, ect.) for concern of damaging the finish or imparting a metallic taste to the food. I've not had an issue with either, although I checked with Lodge for my skillet and they advised using only a well seasoned skillet when cooking with acidic ingredients. If in doubt, use a dutch oven or oven proof enameled skillet. 2. Do not put the discarded artichoke leaves down the disposal. Preferably, compost them or put them in the trash. ~ Veggie Dinner Recipe Round Up ~